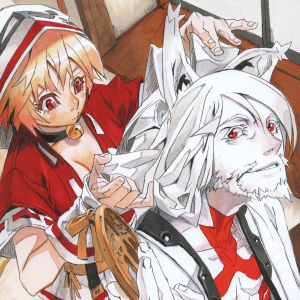 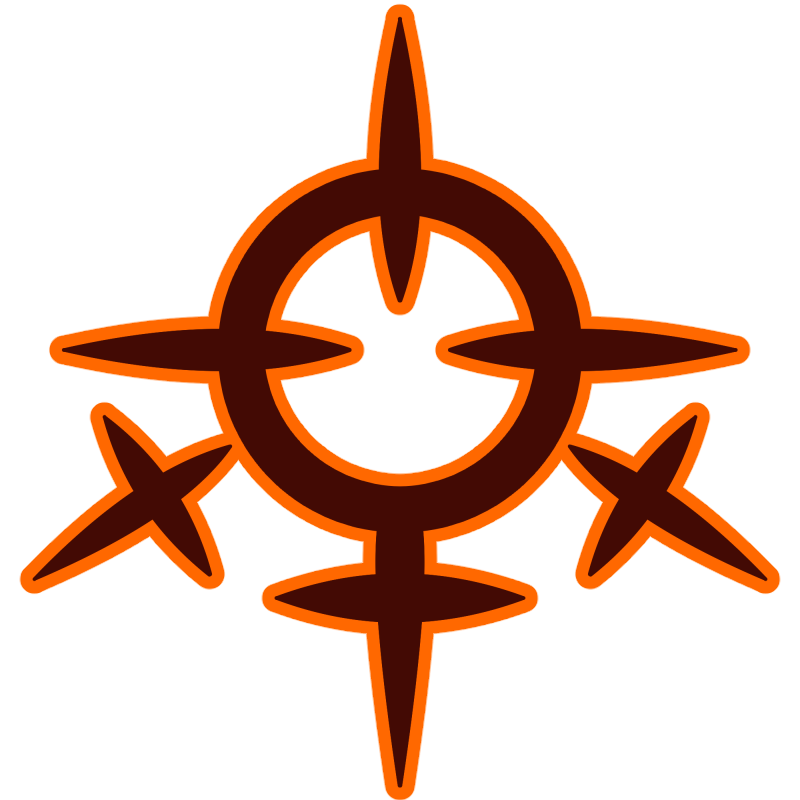 This is Izuna's short story from the Guilty Gear 2 -Overture- Material Collection art book. There are 8 stories total in that book, with this being the third of them.

OYABIN'S TALE OF PAST & PRESENT

There is a world that exists as a dimension completely different from the Backyard and this world, Earth. That world is separated from both this world and the Backyard, and impossible to come and go freely without the definition of the Backyard. This world has been a foreign land inhabited by many different inhuman beings since ancient times.

黄泉平坂. Yomotsuhirasaka . It is the most famous world of them all. Generally written as "黄泉比良坂," it appears in the old Japanese peoples’ ancient documents, Kojiki and Nihonshoki , as an imaginary land. Of course, it is a world created with longing and awe in the sense that it was a place beyond the reach of the people of that time.

What is noteworthy here is the fact that people at that time had the concept of a dimensional world different from the present world, such as the afterlife. In recent years, the existence of the Backyard was at last hypothesized, and in the course of this research the existence of a world inhabited by non-humans, such as Yomotsuhirasaka, was deduced and hypothesized to be a world in a different dimension than the Backyard.

Nekomata played with her master’s hair while speaking to him.

The one who replied with lazy indifference was the popular Izuna, affectionately called "Oyabin" or "Oi-chan."

“Oyabin wears a lot of things, such as charms and sword crossguards, don't you? Hey, what's wrong?"

“I don’t know, I can’t remember. I've worn these for as long as I can remember.”

Nekomata fidgeted and then pulled on the hairpin.

Little Nekomata's cheeks puffed out in anger, but she soon forgot about it.

It was a tranquil day. Izuna's daily routine was to tell stories to his fellow yokai, and the yokai would listen attentively to them.

“I guess I could. Right. We can talk about that today. Let’s see, we’ll start at a leisurely pace then, shall we?”

After seeing Nekomata's face break into a broad smile, Izuna calmly began to tell his story.

It’s an old story now, right? There was this couple. The husband was a boorish, but serious and hardworking government official. The wife was also very kind and devoted to her husband. One day, the husband presented his wife with a beautiful wooden box. Then he told her that he was leaving on a mission. It was a dangerous job and he might not be able to return.

The wife asked her husband what his mission was. The husband's mission was to seal the nine "Killing Stones" scattered all over the country. The stones appeared when a certain yokai was exterminated. A high priest had smashed the stones before, and the pieces were scattered all over the country. The pieces then began to spread a poisonous mist around the area. The plants and trees in the area withered, and anyone who came close to them died from the deadly mist. It was said that the stones were spewing out the exterminated yokai’s hatred.

“But, if you attach a talisman given by the emperor to a killing stone and pierce it with a sword on which a sutra is written, the evil spirit will disappear…”

The husband came back with nine paper talismans and nine ornamental swords from the emperor. The wife thought, “If my husband goes off to war, he might not make it back alive.”

She did not want her husband to die.

That night, after her husband went to bed, the wife took out the talismans and swords. Without them, her husband would not be able to go to war. Then, she thought, she should throw them away somewhere. It was a manifestation of her desire to save her husband and to not let him die.

“S-so what happened next, meow?”

The wife decided to throw them into a nearby lake. She rowed a small boat to the center of the lake and was about to throw away the cloth-wrapped talismans and swords when...

She slipped and fell into the lake!

“What do you think? Don't you want to hear the rest?”

“Well, shall we continue? The wife sank into the lake with the bundle. The end.”

“Just kidding, just kidding. The next day, when the husband woke up, his wife was waiting for him with breakfast ready.”

The husband quietly finished his meal and began to prepare for departure. However, he could not find his swords and the important talismans. When he asked his wife about them, she replied that she didn’t know. The earnest husband reported the situation to the emperor and asked for his judgment. The emperor did not say much, but ordered him to wait until replacement talismans and swords could be prepared.

It was a few days after that. Reports of the disappearance of the poisonous mist came one after another from various places where the rocks were scattered.

The result was so good that the husband was not blamed for losing the original swords and talismans and he lived happily together with his wife for a long time. This time, it's over and done with… for real!

“Happy ending? I feel cheated! ...Why is the wife still alive?”

“Well, who knows? Maybe there is no deep meaning in the old tales. But if Nekomata-chan is a good girl, she might get to find out.”

Oh, that's right. I forgot to mention; inside the gifted wooden box was a venerable hairpin given to the husband by the emperor. It was shaped like an ear of rice, made hundreds of years ago, it just adds to the mystery…

The probability of humans perceiving the existence of a "gate" connecting the Backyard and Earth is close to zero. This is because the appearance of a gate in this world is extremely rare, and its range of appearance extends over the vast area of the entire universe, and the time before it vanishes again is irregular. It is not something that can be found by searching for it.

Such an astronomically low encounter rate was coincidental for the wife on this occasion. On her way down to the depths of the deep, dark lake, the wife encountered such a gateway to the Backyard and was swallowed. Her body was unable to withstand the external pressure of the Backyard, which boasted a high density of compressed information, and she fizzled out and disappeared in mere seconds.

Gods, demons, humans, yokai, and all other forms of life in this world are born with their existence equally defined in the Backyard. Izuna was no exception to this rule.

Originally, tsukumogami and yokai are deified after having their souls in some form of the 8 million things that can exist in the world, and after spending a hundred years or more with their shape fixed to their original form. Izuna, for example, is one of the tsukumogami that protect the island nation of Japan, which exists on the planet Earth in a certain galaxy. These phenomena are caused by rare irregularities that occur in the Backyard.

The "selection of possibilities" of the components of Izuna began to occur at a very early stage. At the stage when the approximate constituent elements had been determined, noise was introduced into the "information that constituted Izuna while his form solidified," and a change occurred in the structure. This is because the "strong thought of the wife for her husband" that remained as information in the Backyard even after the loss of her body accidentally rewrote Izuna's structural information when the irregularity occurred.

And the irregular structural transformation phenomenon consequently had a profound effect on the formation of Izuna's shape and personality. Izuna's soul was embodied in a gift the wife received from her husband before her death, a "hairpin shaped like an ear of rice.”

※This work was written by the author [Yoji Ushizawa] based on ancient Japanese legends and folklore such as "The Fox of Nine Tails" and "The Killing Stone ," with his own interpretation to match the worldview of the "Guilty Gear" series. Please note, the text does not necessarily follow the legitimate lore. 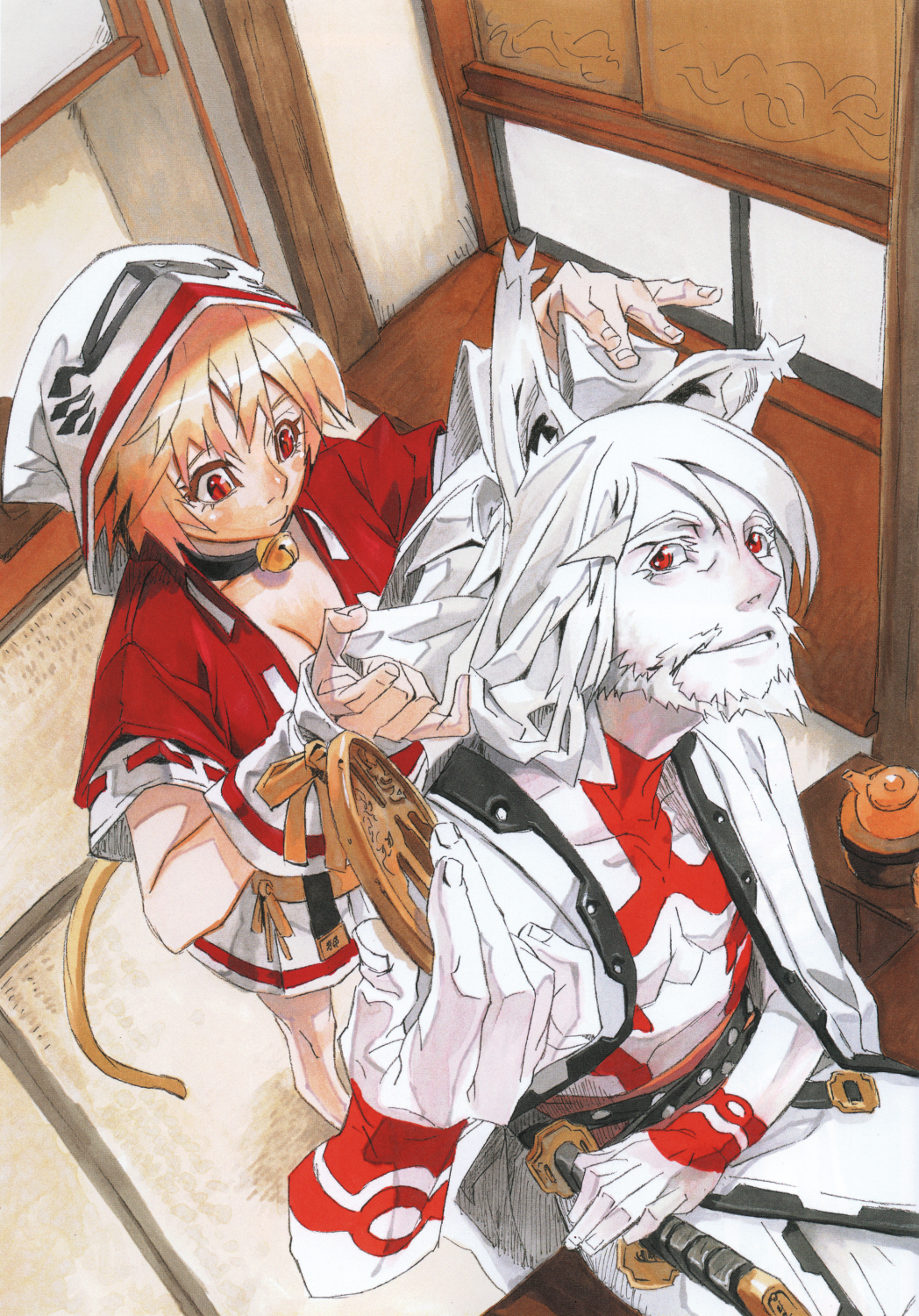